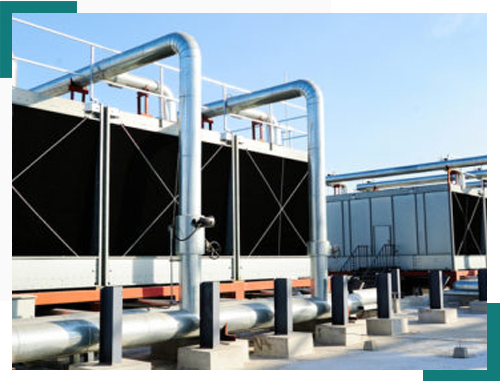 Cooling water systems are an integral part of process operations in many industries. For continuous plant productivity, these systems require proper chemical treatment and preventive maintenance. Monitoring and maintaining control of corrosion, deposition, microbial growth, and system operation is essential to provide the optimum plant operation.

Corrosion definition: Corrosion is an electrochemical process by which a metal returns to its natural oxide state. Corrosion causes loss of metal thickness or even penetration of tube walls which can cause leakage of process fluids into the cooling water or vice versa. Corrosion is generally a greater concern with the more common, lower cost materials like mild steel. For corrosion to occur, a corrosion cell, consisting of an anode, a cathode, and an electrolyte must exist.

Effect of dissolved and Suspended Solids on Corrosion: Dissolved solids can affect the corrosion reaction by increasing the electrical conductivity of water. As the dissolved solids concentration increases, so does the conductivity, and the likelihood of corrosion is greater. Dissolved chlorides and sulfates are particularly corrosive. Suspended solids can influence corrosion by erosive or abrasive action, and they can settle on metal surfaces to set up localized corrosion cells. Acidic and slightly alkaline water can dissolve metal and the protective oxide film on metal surfaces. More alkaline water favors the formation of the protective oxide layer. Below 160°F (71°C), every increase in temperature of 18°F (10°C) causes corrosion rates to double.

How Can Scale Formation Be Controlled? There are four basic means to control scale: 1. Limit the concentration of scale forming minerals 2. Feed acid to keep the common scale-forming minerals. 3. Make mechanical changes in the system to reduce the chances for scale formation. Increased water flow and exchangers with larger surface areas are examples. 4. Treat with chemicals designed to prevent scale.

Scale Controlling Chemicals: Organic phosphates, polyphosphates, and polymeric compounds can act as both threshold inhibitors and kinetic inhibitors. As with corrosion, control of scaling stresses is the only way to ensure that scale formation does not become a problem.

What is Fouling? Fouling is the accumulation of solid material, other than scale, in a way that hampers the operation of plant equipment or contributes to its deterioration. Examples of common foulants are: • Dirt and silt • Sand • Corrosion products • Natural organics • Microbial masses • Fouling can be controlled mechanically or by the use of chemical treatments. The best method of control depends upon the type of fouling. If not controlled, fouling can reduce the energy efficiency of any process served by the cooling system.

Microbial Contamination: The uncontrolled growth of microorganisms can lead to deposit formation that contributes to fouling, corrosion, and scale. The accompanying table lists troublesome microorganisms and the problems they create. What are Microbial Slimes? Microbial slimes are masses of microscopic organisms and their waste products. These slime layers are usually sticky and effective in trapping foulants present in the bulk water.

What is Legionella? Legionella is a group of bacteria present in all natural waterways and biofilms. About half of the Legionella species can produce a pneumonia-like infection in humans. Legionella can live and multiply as a parasite in protozoa. They are very dangerous for general public. As they multiply, Legionella will burst the protozoa and be released into the water. Legionella can survive in biofilms that provide a source of complex nutrients.

AKWT offers full range of high quality chemicals from ANCO-India. Consistent control of both corrosion and scale formation is key to success of any chemical treatment program. Our range of chemicals covers full protection of cooling tower against corrosion, scale and microbiological growth.