Iron corrosion is a major problem faced by world since very long time. Many parameters affect pipe corrosion, which must be properly studied in order to find an effective treatment program specially to control corrosion in cast iron pipes.

Introduction:
Cast iron pipes have been used to transport potable water for over 500 years and iron pipe corrosion has been a problem for just as long. As per AWWA estimates, it will cost US water utilities $325 billion over the next 20 years to upgrade water distribution systems. The majority of distribution system pipes are composed of iron material: cast iron (38%), ductile iron (22%), and steel (5%). Corrosion of iron pipes in a distribution system can cause three distinct but related problems. First, pipe mass is lost through oxidization to soluble iron species or iron-bearing scale. Second, the scale can accumulate as large tubercles that increase head loss and decrease water capacity. Finally, the release of soluble or particulate iron corrosion-byproducts to the water decreases its aesthetic quality and often leads to consumer complaints of “red water” at the tap. The water industry must be concerned with all three of these aspects of corrosion. 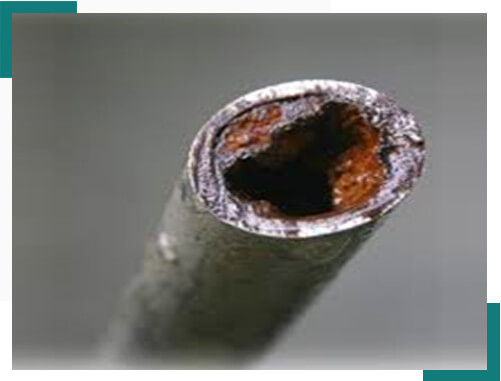 Silicate is the Solution:

Silicates can adsorb onto particles and decrease surface charge. These properties were soon applied to sequestration (dispersion) of iron particles in distribution systems. It has been observed that natural silica present in the water was concentrated in the relatively protective iron scale. Addition of silicate-based inhibitors has also been found to reduce iron corrosion rate.

Finally, silicates are reported to decrease the oxidation of Fe+2 because ferrous iron diffusion through the silicate film is slower than through iron oxide scale. Silicates appear to form a self-limiting film on the corroded iron surface that will break down if silica dosing is stopped. It has been proposed that the metal must already be somewhat corroded because the protective film must consist of ferric oxide and silicate;24 similarly, iron must be oxidized to be sequestered by the silicate.

Addition of silicates can also raise the pH, which is generally beneficial towards iron corrosion. Silicates are naturally present in many waters, and may have effects like those of added silicate inhibitors.